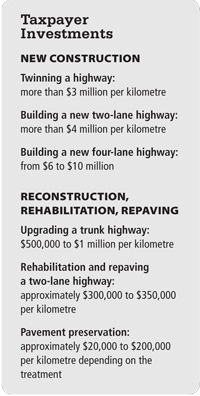 through federal cost-shared agreements such as the Building Canada Fund, and the Canada Strategic Infrastructure Fund to help improve infrastructure across the province

Transportation is a critical part of strengthening communities from one end of Nova Scotia to the other. The province will continue discussions with the federal government to extend twinning on Highway 103 and to complete Highway 101. Access to the Burnside Industrial Park will also be improved through the completion of the Burnside connector.

Examples of projects underway include: