Why a Five Year Plan?

A strong and modern highway system connects communities in Nova Scotia, and boosts our economy. 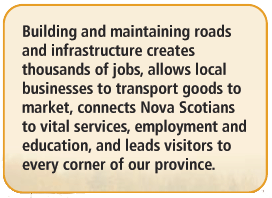 Building and maintaining roads and infrastructure creates thousands of jobs, allows local businesses to transport goods to market, connects Nova Scotians to vital services, employment and education, and leads visitors to every corner of our province.

To help achieve our goal of providing a safe and efficient highway system, we have developed a five year plan for the construction, maintenance and improvement of roads and bridges across Nova Scotia. This five year plan will serve as a long term blueprint for building and maintaining our highway system.

The plan will also increase transparency around road building in Nova Scotia. In addition to the many projects included in the plan, each year following the Legislature's approval of the Highway Capital Budget we will release a complete list of all projects that will be completed during the construction season. We'll also report back on projects completed the previous year. This kind of longer term planning and reporting will help us make the most of available federal dollars and work more effectively with communities and road builders.

A More Balanced Approach to Improving Our Roads

In the past a 'worst first' approach had been used as the primary method to determine which roads would be improved each year. While ensuring the most damaged roads are addressed first may seem a sensible way to select roads for improvement, it is not always the most effective way to improve the road system overall. Focusing only on the most severely damaged roads results in the most costly repairs, meaning fewer kilometres of roads are improved each year. As a result, over the years many more kilometres of roads have fallen into a severely deteriorated condition, resulting in an overall decline in the condition of the entire paved road system. In other words, by directing funding only to the most damaged roads, the overall condition of the paved roads has been deteriorating at a much faster rate than they could be fixed.

In order to get the best value for our investment, a more balanced approach is required. In the future, while we will still continue to address the most severely damaged roads on a "worst first" basis, a larger portion of the highway improvement budget will be directed to improving paved roads before they become severely damaged and require costly repairs. While we will still continue to face significant road improvement needs, this approach will help make sure available funding is used in a more efficient and effective way.

Just like it makes sense for a homeowner to repair a leaky roof before major structural problems occur, moving from a 'worst first' to a more balanced approach that includes pavement preservation will increase both the overall condition of the highway system and the number of kilometres repaired in any given year.

This more balanced approach using the treatment options and preservation techniques outlined on the next page in the next budget, will provide a number of benefits, including:

There are approximately 23,000 kms of roads and 4100 bridges in Nova Scotia. This includes 100-series highways, secondary highways, local paved and gravel roads, and many concrete, steel and wooden bridges.

100-series highways are the backbone of the provincial highway network. They carry the most vehicle traffic, and the heaviest trucks, at the highest speeds of all our highways. They are a key component of our provincial economy in moving people and goods across the province and connecting Nova Scotia to other parts of the world. These highways must be kept in good repair, and have sufficient capacity to safely move high volumes of traffic at high speeds. This requires significant maintenance and capital improvements on an annual basis, from the construction of new interchanges and twinned highways to meet traffic demands, to other activities such as repaving and sealing to extend pavement life.

Provincial secondary highways, trunks and routes also provide important links across the province, connecting hundreds of thousands of Nova Scotians and visitors with vital services, businesses and communities from Yarmouth to Sydney. They are an important part of our provincial tourism industry, carrying visitors along our scenic coastlines and through our picturesque communities. Over the last several years, many of these roads have declined in condition and now need to be rebuilt, rehabilitated, or repaved. The five year plan includes a number of programs to address the condition of these secondary trunks and routes including upgrading, reconstruction, and repaving.

Local paved and gravel roads typically have lower traffic volumes, many less than 500 vehicles per day. Traditionally the majority of available highway funding has gone toward improving the more heavily traveled 100-series and secondary highways. As a result, many of these low volume roads have deteriorated to unacceptable levels. Despite record investments in the last two years, given the needs across the province and competing priorities for tax dollars, improving these roads has been a challenge. To address this reality, in the coming years the province will improve more low traffic roads by expanding the use of surface stabilization and pavement preservation techniques in order to improve more roads in more communities across the province.